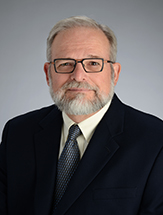 The day after I was accepted to KU’s medical school in 1971, Dr. Dante Scarpelli, Chair of the Department of Pathology and Oncology, called, and said that he had been on my interview committee and saw that I had been doing cell biology research as an undergraduate. He invited me to visit the department the following Saturday to meet with some faculty members. The department had received NIH funding to start an MD PhD medical scientist training program and he wanted to know if I might be interested in becoming their first trainee. I was taken aback by this invitation but did not know enough about Pathology to accept. To gain more insight into experimental pathology, Dr. Scarpelli arranged for me to work in the laboratory of Dr. Masahiro Chiga during the following summer. After that stimulating experience, I readily accepted Dr. Scarpelli’s offer to become the Department’s first MD Ph.D. student.

After graduation from the medical scientist program, I completed an internship at the University of Chicago and Pathology residency at the University of Kansas Medical Center. I then joined the KU Pathology faculty in 1977 to practice clinical pathology and begin pursuing basic research involving the characterization and biological function of the Rh D blood group antigen. This research led me to become more interested in Transfusion Medicine. Eventually I realized that some of the methods we were using to characterize the Rh D antigen could be adopted to automate blood group serology, which at that time was performed manually in individual test tubes.

In order to have more time to pursue this idea, I left KU in 1982 and became Assistant Medical Director of the Community Blood Center of Greater Kansas City. During the next five years, my small research team invented the solid phase red cell adherence method for pre-transfusion serologic testing. One of my graduate students, Lyle Sinor, and I also bought an Apple II computer and a CCD camera and enrolled in computer programming classes at Johnson County Junior College. We learned to write image recognition software so that the CCD camera could automatically interpret solid phase blood typing reactions. In 1999, the American Association of Blood Banks recognized our work by awarding the Morton Grove-Rasmussen Memorial Award.

Once we realized its potential commercial value, we worked with a local intellectual property attorney to patent every facet of this technology. Altogether, we were granted six patents and a copyright for our image analysis software. After presenting our research at the American Association of Blood Banks meeting, we were contacted by the three founders of Immucor, Inc., a small startup company, looking for a novel technology to distinguish themselves from established blood bank companies. We began collaborating with them and eventually transferred the patent rights and technology to their company in Norcross, GA.

Within a few years, Immucor became one of the leading international blood banking companies. For the past 30 years, Immucor has sold our technology worldwide under the trademarks Capture P and Capture R. Under the guidance of Dr. Sinor, they later developed totally automated analyzers called the Neo and the Echo, based on our original technology.

Instead of becoming the Chief Medical Officer for Immucor, I decided to return to hospital pathology. I accepted a Clinical Pathologist position at Saint Luke’s Hospital in Kansas City, MO in 1987 and was promoted to Medical Director of Saint Luke’s Regional Laboratories in 1991. During my tenure at Saint Luke’s, the health system expanded to include nine hospitals with clinical laboratories that we fully integrated and standardized. Other accomplishments included partnering with some other local laboratories to create the Regional Laboratory Alliance. The goal of this alliance was to keep as much esoteric testing as possible in town and limit the amount of testing sent to reference laboratories. This collaboration allowed Saint Luke’s outreach testing to grow to 54% of our billable tests. We also established a molecular laboratory and became the second US hospital to be designated a Roche Diagnostics Molecular Center of Excellence. Other successes included establishment of the first transfusion stewardship and laboratory stewardship programs in the Midwest.

In 2015, Saint Luke’s administration entertained selling our profitable laboratory outreach program to one of the national commercial laboratories. When Dr. Lowell Tilzer heard of this development, he recruited me to return to KU. I joined as a Clinical Professor in September 2015 and became Medical Director of Clinical Laboratories in 2017 and Executive Vice Chair for Clinical Affairs in 2020. My primary areas of interest have been clinical chemistry, immunology, transfusion medicine, and apheresis. During my career, I have given 150 invited presentations and published 110 abstracts, 90 scientific articles, and a textbook entitled Essentials of Transfusion Medicine.

I have always enjoyed teaching. During my career, I have had the opportunity to teach medical students, residents, faculty, medical laboratory scientists, and nurses. Over the years, I have written descriptions of hundreds of laboratory tests, test utilization recommendations, and transfusion guidelines. Eventually, I decided to find a way to disseminate this educational material to a wider audience. Fortunately, my son Chris was a web designer and had experience hosting websites for small businesses. Together, we founded a company called ClinLabNavigator LLC and created the website ClinLabNavigator. com. Chris provides the technical expertise and I write the medical content. Today, ClinLabNavigator contains over 1,000 laboratory test interpretations, guidelines, and blogs that averages more than 70,000 visitors per month.

I am so grateful that Dr. Scarpelli introduced me to Pathology fifty years ago. I’ve enjoyed a wonderful fulfilling career, but now feel it is time to retire. I would like to thank the department for allowing me to finish my career where my journey began.