Tyler Hughes, M.D., hopes to share his passion for rural health care with KU medical students in Salina as the new dean. 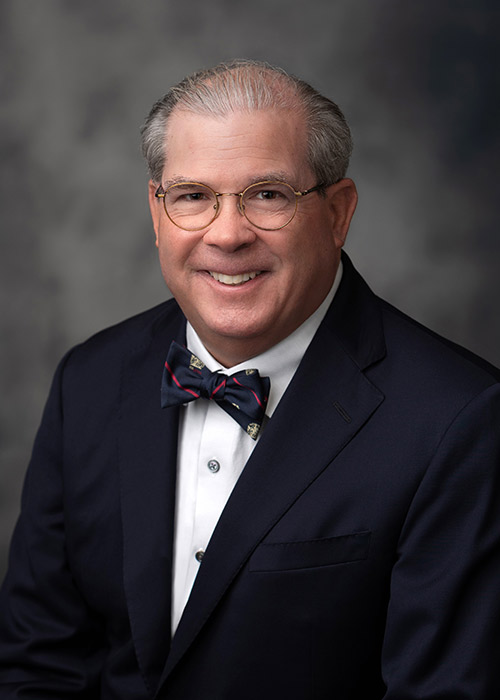 Tyler Hughes, M.D., has been named the new dean of the University of Kansas School of Medicine-Salina campus. Hughes will succeed Robert Moser, M.D., who had been dean since 2019.

Hughes, who will officially become dean January 10, has been director of medical education at KU School of Medicine-Salina, where he also has taught as a faculty member, since 2016.

“With Dr. Hughes’ skill set, longstanding commitment to the school and his passion for education and advancing health in rural communities, I am confident that he will effectively serve the Salina community and champion the ongoing success of KU School of Medicine-Salina,” said Robert D. Simari, M.D., executive vice chancellor of the University of Kansas Medical Center.

Originally a Texan, Hughes served as a rural surgeon in McPherson, Kansas, where he relocated with his wife in 1995 after years of being a general surgeon in Dallas.

“I loved being a rural surgeon,” Hughes said, noting that it was quite different from being a surgeon in Dallas. Hughes said he enjoyed being a part of the community in McPherson, and he also enjoyed the wide variety of cases that came his way. One day he might have been called upon to perform surgery to remove a gall bladder, another day it might have been a wound repair, an emergency cesarean section or a compound fracture.

Hughes became an educator at the close of his career in surgery because he hoped to inspire others. “My main objective in my previous role was to bring a surgical perspective to the School of Medicine in Salina,” he said, noting that he taught students through all four years of their program. “All doctors need to know how to do some surgery, and it’s important to have an understanding of it no matter what or where you plan to practice.”

As dean in Salina, he hopes to continue to share his passions, both for surgery and for practicing in rural communities.

“You have to know the same things (as the doctor in the city), but sometimes you need to play the game of chess differently. You may have limited supplies of blood, for example, or you may be hours from the nearest pulmonary or neurology consult. You have to learn to think several steps ahead.”

As for his leadership style, Hughes sees himself as the conductor of a symphony, not the loudest trumpet or the clanging cymbal. Hughes credits Emily Diederich, M.D., director of the Zamierowski Institute for Experiential Learning and assistant vice chancellor for simulation at KU Medical Center, with articulating the idea he has embraced.

“She has a slide that she shows in simulations that says the leader can best be described as an orchestral conductor. Rather than telling people what to do, you want to listen, think and then coordinate.”

Hughes has held numerous leadership positions in the American College of Surgeons over the years, and he is a sought-after mentor, professor and scholar. He fills his free time with a variety of activities, from reading to race car driving. In 2012, he was named Rural Healthcare Practitioner of the Year by the National Rural Health Association, an honor that has resonated with him deeply as he has been active in national efforts to promote rural health care.

“I’m really excited about the possibilities in Salina and our potential to help the Salina community, western Kansas, central Kansas and beyond. We have a great team of people who work here, and we turn out great doctors. I’m excited to continue that and to help take us to the next level.”

Hughes also is looking forward to bringing his perspective to KU School of Medicine-Salina as dean, where he will continue to encourage people to say yes to opportunities, just as he has over the years.

“I subscribe to the famous quote, ‘Ninety percent of success in life is showing up,’ and that has been true for me,” he said. “When you show up, you get to do more things and learn more. Sometimes you have to let go of things, like I had to let go of operating in the operating room. But there’s always more to learn and more to do.”