The school’s new digital twin campus promises to change the way KU nursing students learn and eventually how many can be taught. 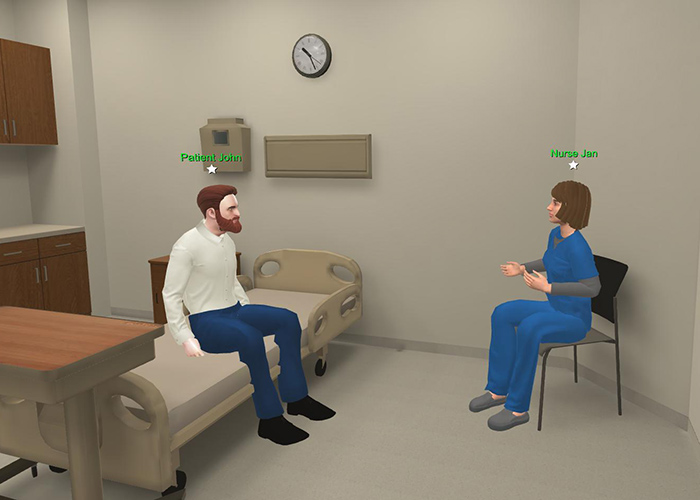 KU nursing students can meet patients in virtual exam rooms and simulation spaces in the Metaversity that look just like the actual spaces on the Kansas City and Salina campuses.

As a child growing up in California, Alejandra Buenrostro used to watch The Magic School Bus on television. In this animated PBS series, Ms. Frizzle and her students rode a special bus that could take them on science field trips to otherwise impossible places, including inside the human body.

Now a bachelor’s student at the University of Kansas School of Nursing-Salina, Buenrostro has a chance to learn almost the same way. By donning a headset that enables her to gather with her classmates in a virtual reality (VR) replica of the KU School of Nursing campus, she also will be able to travel, virtually, inside a human heart, look at the tubules inside a kidney and explore a pair of lungs.

This fall, KU School of Nursing was one of the first 10 institutions of higher education, and the sole nursing school, that launched their VR “Metaversity” through Meta’s Immersive Learning project. (Meta is Facebook’s new corporate name.) Also described as digital twin campuses, these metaversities are part of Meta’s $150 million endeavor to increase access to education and change the way people learn.

“Instead of spending three hours listening to a lecture on the respiratory system, you could listen to a shorter lecture and then spend 30 minutes of VR inside the body,” said Kesa Herlihy, Ph.D., clinical associate professor and director of the Simulation Education Program at KU School of Nursing. “It’s a totally different method of instruction. We have the potential to revolutionize nursing education.”

Educating people where they are

That revolution includes not just how people are educated, but how many. Enabling more people to attain nursing degrees is critical. The nationwide shortage of nurses was serious even before the pandemic exacerbated it, and there simply are not sufficient classroom spaces and nursing faculty to train enough new nurses.

“Every year, 80,000 to 90,000 qualified students in the United States get turned away because we don't have enough spaces in nursing schools. In Kansas, we have potential students across the state who are not in a position to move to Kansas City or Salina [to attend KU School of Nursing],” said Herlihy. “So we need to be able to educate people where they are. Virtual reality is a way to do that.”

KU School of Nursing started exploring VR learning in earnest during the pandemic after classrooms were closed and access to many clinical sites was limited. In the spring of 2021, Herlihy was on a team participating in a virtual reality/augmented reality competition with KC Digital Drive, a nonprofit organization working to make Kansas City a digital leader. Herlihy’s team, who used augmented reality to design a more realistic, interactive manikin for students to use to practice procedures, won the event. With the $7,500 prize, they bought five headsets and began to explore fully immersive VR environments.

At the end of 2021, KU School of Nursing partnered with VictoryXR, the VR company that builds the metaversities, to construct a digital twin of the school’s campus. The idea is for anyone, anywhere, to be able to attend classes virtually. As part of the partnership, Meta supplied the school with 50 more VR headsets. Both undergraduate and graduate KU nursing students will use the Metaversity.

The goal isn’t to replace all traditional classroom learning, but to incorporate immersive VR experiences that enable deeper understanding. The Metaversity also will not substitute for interaction between student nurses and real patients.

“We understand how important it is to have human-to-human, face-to-face contact,” said Cynthia Teel, Ph.D., FAAN, associate dean of academic and faculty affairs at KU School of Nursing. “This will be an additional tool we can use so students are even better prepared when they have that very valuable time with patients.”

Going to nursing school from the kitchen table

Currently, students using a headset can stand on Rainbow Boulevard in Kansas City, looking up at KU Medical Center’s Murphy Building. They can enter the atrium in the nursing school and then go up the stairs to the first floor, where on the left they can find the lab for the Salina students, and on the right the lab for Kansas City. In these labs they will find exam rooms and simulation spaces.

So far, students have used the headsets to learn to conduct patient assessments in VR. Using avatars they create to resemble their real selves, they enter an exam room in the Metaversity that looks exactly like an actual exam room at the school. Once there, they can conduct health assessments with “patients” by asking them a series of questions while their instructors watch and evaluate.

Buenrostro was sitting at the kitchen table in her apartment in Salina when she conducted her first patient assessment via the Metaversity. She was impressed that the instructors had even placed virtual posters on the virtual walls of the exam room that listed some of the questions they should ask patients, just in case anyone forgot.

“Another good thing about the metaversity is that my friend [a fellow student] and I can always go back into the simulation,” she said. “We can enter the metaversity when we want so we can practice and see our strengths and weaknesses.”

Making a big difference in nursing

KU School of Nursing could be fully virtual today, Herlihy said, if it were just a matter of conducting virtual classrooms.  It’s the immersive part, the magic school bus part, that takes the time. Those pieces are being rolled out gradually.

The school is working with VictoryXR and another VR company, Bundle of Rays, to develop fully immersive nursing lessons as well as three-dimensional virtual objects that students can touch, turn and manipulate. Herlihy said she recently submitted a list to the VR companies requesting at least 40 objects needed for students to learn to conduct an HEENT (head, ears, eyes, nose and throat) examination. An eye. An eye with glaucoma. One with cataracts. And so on.

It’s a massive project with a number of administrative issues still to work out, but Herlihy said she believes the school could have most of the Metaversity completed, with all immersive experiences incorporated across the curriculum, as soon as 2025. The School of Nursing would also need to work with clinical partners to support additional clinical rotations and grow the program.

“Right now, we admit 138 traditional undergraduates in Kansas City and Salina every fall, but utilizing VR technology could allow us to admit many more,” Herlihy said. “This can make a really big difference in nursing.”