With help from local teachers and other members in his department, scientist Aron Fenton is breaking down stereotypes about scientists and sharing stories of science as a career. 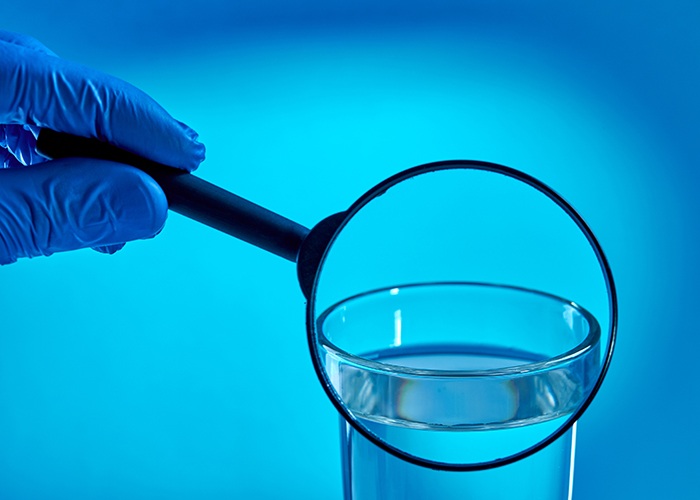 Experiments for middle school students involved simple ingredients such as this beaker of water. Through a videolink to classrooms, Aron Fenton, Ph.D., led the students to float a needle in water to prove a scientific principle.

Picture this. You’re in middle school, on your way to your required science class, when you see a sewing needle and a cup of water on your lab table.

We’re sewing in science? And getting thirsty while doing it? But you would have guessed wrong.

Instead, what you see is an experiment that explains the concept of molecules at the water/air interface. But you don’t know that yet. Via video, you learn from a professor at a university why a dry needle floats in water. But, as you discover, a needle sinks in soapy water. Hmmm.

And maybe, just maybe, when it comes time to sign up for high school classes, you won’t be so intimidated by the science offerings. And maybe you’ll sign up for some.

That’s the thinking behind a series of classes that were offered to middle school students across the metro. From Olathe to Kansas City, Kansas, science classrooms tuned into see Aron Fenton, Ph.D., perform simple but interesting experiments they could replicate at their lab tables. Then they could hear one of Fenton’s guests, fellow professors at the University of Kansas Medical Center, explain why they loved science and decided to make it their career.

The program finished its second year in 2021-2022 and reached 900 students. Fenton, a professor of biochemistry and molecular biology in KU School of Medicine, credits the origin of the program to members of the Fenton laboratory. Braelyn Page, a technician and applicant for the MD/PhD program at KU Medical Center, took an especially strong interest in the program.

When Fenton indicated interest as well, they began developing the program with a steering committee comprised of area educators. One committee member, Betsy Lawrence, is a science teacher at Summit Trial Middle School in Olathe. She was pursuing her doctorate degree at in the KU Department of Curriculum and Teaching, so she decided to monitor the influence of the program on middle-schoolers.

“This program is super important for our middle school students, especially so they can start seeing themselves as scientists,” Lawrence said. “The more realistic opportunities that we can give our students to themselves in the place of a scientist – to be able to experience what an actual research scientist does – gives them a better perspective of the job.”

Reaching out to the community

Douglas Huffman, Ph.D., professor of science education in the Department of Curriculum and Teaching on KU’s campus in Lawrence, Kansas, said this project aligns with the National Science Education Standards, which were recently updated. These standards, established by the National Research Council, are a set of guidelines and goals for science teachers to consider when planning their lessons.

“The new standards have community outreach and relationships with the community as a larger portion of the new standards,” Huffman explained. “It’s just one reason why we’re so glad to see Dr. Fenton reach out.”

The program also serves to introduce students to scientists of different races, ethnicities and genders than that of the stereotypical white male scientist. But that stereotype has some grounding in reality, since the National Science Foundation discovered white men make up 49% of employed scientists and engineers.

“There’s also a shortage of scientists and engineers nationally,” Huffman said. “This program introduces students to the fact that science is not out of their reach. They learn, ‘OK, I can do this.’”

And by welcoming students from multiple districts and including guest scientists that represent diversity, Fenton is addressing a diverse demographic in hopes of inspiring more students currently underrepresented in science. “Diversity as a concept was built in. The university has minorities in science programs, but we wanted to make this accessible to everyone,” he said.

Fenton said he didn’t want to be just another “Skype a Scientist,” a program that brings scientists into a classroom via videolink to talk about what they do. He wanted something more interactive.

“I spent hours on YouTube, going through experiments we could do. Some of them are really fun,” he said. “But this isn’t about competing with YouTube,” Fenton said. “The real selling point is that we’re scientists interacting with the students. We’re not building new experiments. We’re building new interactions.”

That approach has meant a lot more coordination with school districts and teachers than a simple (but passive) lecture or even a question-and-answer session. Fenton and his guest scientists communicate the experiments to teachers far in advance so they can set up the needed items in advance of the videolink into the classrooms. But some adaption is allowed.

“Last year, we had students floating nails instead of needles because they couldn’t find needles. We found them floating tacks – one of them in even got a penny to float,” he said.

When Fenton and his team were deciding which classrooms might best benefit from the program, the steering committee of educators agreed on middle school.

Huffman said that middle school is a great time to introduce science as a career. Once students are in high school, they’re often already segregated into career preparation fields, he explained.

At the end of the program, students are given the opportunity to provide feedback to Fenton and his team. Lawrence said her class feedback was “very positive.”

“All the experiments that Dr. Fenton led, the teacher could have easily done,” Lawrence explained. “But it presents a different perspective when another person is leading them through it.”