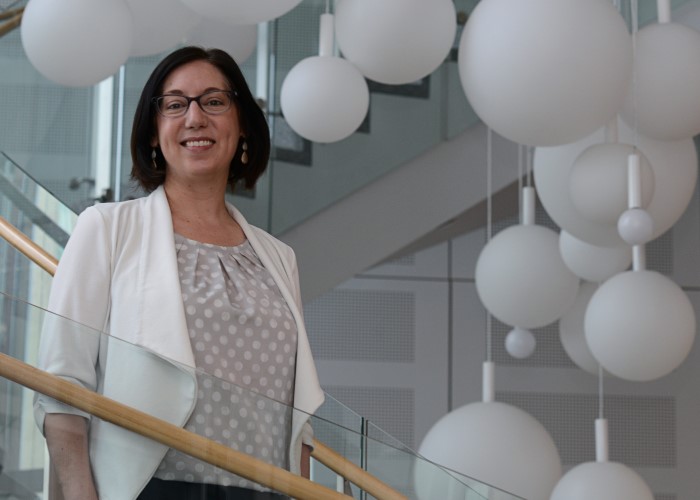 Karen Towne, a Ph.D. student in the University of Kansas School of Nursing, has been named one of only 75 U.S. students in the national Jonas Nurse Scholars program’s 2021-2023 cohort. Towne is studying the effects of disaster-related stress and trauma on pregnancy, especially in low-income, rural households.

Karen Towne, a Ph.D. student in the University of Kansas School of Nursing, has been named one of only 75 U.S. students in the national Jonas Nurse Scholars program’s 2021-2023 cohort. The program supports advanced-degree nursing students starting a career in nursing research.

Towne is already in the classroom as a clinical assistant professor of nursing at the University of Mount Union in Alliance, Ohio. When she decided to pursue a doctoral degree, KU School of Nursing was her top choice despite being more than 800 miles from home.

The Jonas Nurse Scholar program offers expert mentors to help scholars in their respective fields and provides financial assistance of $7,500 a year for two years ($15,000 in total). The funds are matched by KU School of Nursing.

"That match from KU is a huge deal to me, especially in light of the COVID-19 pandemic," Towne said. “When a lot of programs were shifting how their money was being spent, KU held true to its promise to match the scholarship dollar for dollar.”

As a student in KU School of Nursing’s Ph.D. program, Towne is studying the effects of disaster-related stress and trauma on pregnancy. She is concentrating on low-income pregnant women living in rural areas. These women may be dealing with daily stressors that could affect the fetus’s growth and development.

The particular changes brought on by stress might not stop with just one generation, Towne hypothesizes. Stressors that change the genetic makeup of a fetus could be passed on to a new generation once that baby grows up to have children. And then that person – the grandchild of pregnant woman who first experienced the stressor – passes along those same changes to a third generation and so on. This particular field of study is called epigenetics, the examination of how genes react to behaviors and environment.

“Epigenetics isn’t about changing the genetic code, but how environmental factors activate and silence our genetic code, turning gene expression on and off,” Towne explained.

A well-known example of epigenetics came from the study of Holocaust survivors and their offspring. The trauma of surviving the concentration camps imprinted on the survivors’ future children in a way researchers could measure. By focusing on the stress gene FKBP5, which had previously been linked to post-traumatic stress disorder, depression and mood disorders, and on FKBP5 methylation—a mechanism that controls the gene's expression—researchers found something interesting.

FKBP5 methylation was present in Holocaust survivors, as one might expect, but it was also present in their offspring, and many of those offspring showed signs of depression and anxiety associated with FKBP5.

Now Towne is building on that research to see how natural disasters such as flooding, tornadoes and hurricanes affect fetal development. “Because climate change is increasing the frequency, scope and severity of disasters, we’re going to have to learn to adjust. If we learn more about epigenetics, then perhaps we can prevent those changes,” she said. “That’s really my focus – prevention science. My horizon point is, ‘What interventions can we do to protect the mom and fetus and that fetus’s future offspring?’”

About the Jonas Scholar Program

To combat the nationwide nursing shortage, Jonas Philanthropies earmarked funds for potential doctoral nursing students to achieve their educational goals. According to the philanthropy, 9.6% of all nursing faculty positions were vacant in 2016, and those vacancies have contributed to more than 64,000 qualified applicants being turned away from nursing undergraduate and graduate programs nationally.

The Jonas Scholar program began in 2008 and refined its selection process in 2018. A Jonas Scholar receives financial assistance as well as opportunities for leadership development and networking. At least one student from KU School of Nursing has been chosen as a Jonas Scholar for every cohort since 2012, according to Cynthia Teel, Ph.D., FAAN, associate dean of academic affairs.

Your ZIP code and your baby’s health

Towne further narrowed her study field to rural areas because of another element of her research: social determinants of health. Social determinants such as economic stability, access to health care and community support can have a powerful impact on the health of person living in a certain environment. Towne wants to see how the stressors of rural living affect a growing fetus.

“There’s a great quote from a Harvard blog that says your ZIP code is a better predictor of your health outcomes than your genetic code. So, social determinants will definitely play into my work,” Towne said.

Pandemic pause and full steam ahead

As a full-time clinical professor, a full-time doctoral student and the mother of two children, Towne said she depends on a heightened level of organization to balance it all. That delicate balance was upended because of the COVID-19 pandemic. As a public health nurse in 2020, she was needed on the front lines of the pandemic response. So, she took a year-long break from her Ph.D. studies with the blessings of KU School of Nursing faculty.

“They were incredibly gracious about it, and allowing me to come back,” she said.

Barbara Polivka, Ph.D., RN, FAAN, associate dean for research in KU School of Nursing, said Towne’s work during the pandemic only proves her dedication to nursing.

“Karen was instrumental in keeping the local health department staff apprised of the ever-changing nuances of protecting the health of the rural population they served,” Polivka said. “These types of experiences have and will continue to shape Karen's scholarly focus.”