Mazen Dimachkie, M.D., was one of 36 researchers from Europe and North America to recruit participants for the first large-scale, randomized control study investigating intravenous immune globulin as a treatment for dermatomyositis. 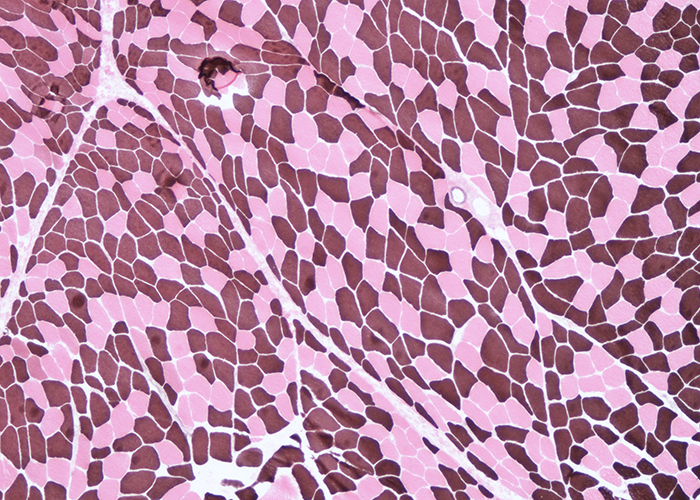 Mazen Dimachkie, M.D., was among the authors of a New England Journal of Medicine article outlining the positive results of the first large-scale, randomized controlled clinical trial testing the effectiveness of a drug to treat dermatomyositis. | Photo credit: Microphotograph provided by Mazen M. Dimachkie, M.D.

Mazen Dimachkie, M.D., professor of neurology at the University of Kansas Medical Center, was among the authors of recent research published in the New England Journal of Medicine reporting positive results of the first large-scale, randomized controlled clinical trial demonstrating the effectiveness of a drug to treat a rare disease, dermatomyositis (DM).

Published in the Oct. 6 edition of the journal, the Progress in Dermatomyositis (ProDERM) study investigating the effectiveness of intravenous immune globulin (IVIG) in treating DM was the catalyst for the recent U.S. Food and Drug Administration approval of IVIG as a treatment for the condition.

DM is a rare systemic autoimmune disease that causes progressive muscle weakness and skin rashes. Previously, DM has been treated using steroids and other immunosuppressive agents that improved the condition but were being used off-label and came with significant side effects.

In the 16-week ProDERM trial, researchers from 36 European and North American sites enrolled 95 participants with DM who were assigned randomly to either the IVIG group or the placebo group. By the end of the 16 weeks, the research team found that the proportion of participants in the IVIG group who showed at least minimal improvement without confirmed deterioration of disease (79%) was greater in comparison to that observed in the placebo group (44%). The difference between the two groups was statistically significantly.

“Prior to the ProDERM trial, the few large-scale controlled studies in myositis had failed to show a difference between the intervention group and the control group. ProDERM is the first large-scale randomized controlled study to demonstrate a positive outcome in DM,” Dimachkie said. “This success provides a road map for the design of future myositis clinical trials, and in particular DM.” (Myositis is any condition causing inflammation of the muscles, including dermatomyositis.)

The ProDERM study also utilized the Total Improvement Score (TIS) as a primary outcome measure. The TIS is a weighted composite score including six components related to myositis activity.

“The successful implementation of this novel outcome measure will impact future research studies. The message moving forward is that DM studies should strongly consider using the TIS as a primary outcome measure,” Dimachkie said. “Its ultimate validation as demonstrated by the TIS successful implementation in the ProDERM study will stimulate researchers from academia and industry to launch more studies to investigate therapies to benefit people living with myositis.”

Dimachkie directs the KU neurology department’s neuromuscular division and oversees one of the largest neuromuscular research clinical trial units in North America. A frequently invited international presenter on neuromuscular conditions, he also is one of four elected coordinators for the International Myositis Assessment and Clinical Studies Group (IMACS), a consortium of 600 health care professionals focused on improving the lives of people with myositis through research.