Susan Carlson, Ph.D., has spent decades researching the role of fatty acids in infants and pregnant women, and the University of Kansas has recognized the importance of that research. 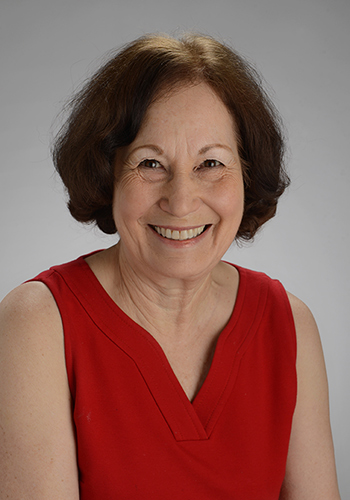 Susan Carlson, Ph.D., received the 2022 Chancellors Club Career Research Award. Her research focuses on the health of infants and their mothers.

For Susan Carlson, winning the 2022 Chancellors Club Career Research Award is a validation of years of interdisciplinary research.

Carlson, Ph.D., is the A. J. Rice Professor of Nutrition in the Department of Dietetics and Nutrition at the University of Kansas Medical Center. She specializes in intervention studies of fatty acid supplementation in infants and pregnant women.

“I think the reason I’m getting this award is because I became a pioneer without intending to be a pioneer,” Carlson said. “Many years ago, I was confronted with a situation that I recognized as an unrecognized nutritional problem, and it sent me off on this odyssey.”

Carlson joined the KU Medical Center faculty in 1999. She is one of the country’s most prominent and dedicated researchers on polyunsaturated fatty acid nutrition and the neurocognitive effects on babies.

In the early 1980s, Carlson discovered that infant formula was lacking the necessary fatty acids for optimal neurodevelopment of babies. Thanks in part to her research, 99% of all infant formulas now include these fatty acids.

Her recent collaboration with Byron Gajewski, Ph.D., professor in the Department of Biostatistics and Data Science at KU Medical Center, showed that taking supplements of one of those fatty acids, the omega-3 fatty acid DHA (docosahexaenoic acid), decreased the chances of an early preterm birth.

Carlson’s focus on nutrition for infants and pregnant women was “serendipity,” according to the researcher. She had originally planned to study lipids and their role in cardiovascular disease, through a postdoctoral fellowship in a department of pediatrics. That launching point became the focus of her life’s work. “No one else in pediatrics was particularly interested in fatty acids at that time,” Carlson said.

She recognized her wonderful collaborators in her past as well as the ones at KU Medical Center as invaluable to her work. “I couldn’t have done the work I do without collaborations with many who are experts in their own disciplines. I’m a big believer in interdisciplinary research teams.”

Carlson has published more than 165 peer-reviewed journal articles with more than 14,000 citations to her credit. She has received numerous awards and recognition, including being named a University Distinguished Professor while at KU.

“Susan Carlson is amazing,” said Debra Sullivan, Ph.D., chair of the Department of Dietetics and Nutrition at KU Medical Center. “She is internationally known for her research, and it has changed the landscape of maternal and infant nutrition globally. We are fortunate to have her at KU. Her passion and dedication to improving the lives of children is palpable.”

Jacob Sosnoff, Ph.D., associate dean for research and professor in the Department of Physical Therapy, Rehabilitation Science and Athletic Training, helped to nominate Carlson for the Chancellors Club Career Research Award. “I will emphatically state that Professor Carlson’s research has had a significant and long-term impact on research — and perhaps more importantly, on the health and well-being of individuals and communities in Kansas and beyond.”

Carlson said she has delayed retirement because she still enjoys what she’s doing every day and still has work she wants to do.

“My primary motivation is ensuring that infants start life without limitations that could have been prevented by better nutrition,” she said. “This award means a lot to me and the Department of Dietetics and Nutrition in the School of Health Professions. I am happy for our school and our department.”

Sullivan said she looks forward to seeing Carlson’s continued passion for mentoring the next generation of scientists to follow in her legacy. “I know she is not through with her research journey, and I look forward to her continued discoveries and practical applications of her research,” Sullivan said.

The one Chancellors Club Career Research Award recipient is chosen from all KU researchers. Carlson will receive $10,000 annually for the next five years, funded in part by donors to the Chancellors Club.

The award is offered through KU Endowment, the independent, nonprofit organization serving as the official fundraising and fund-management organization for KU.